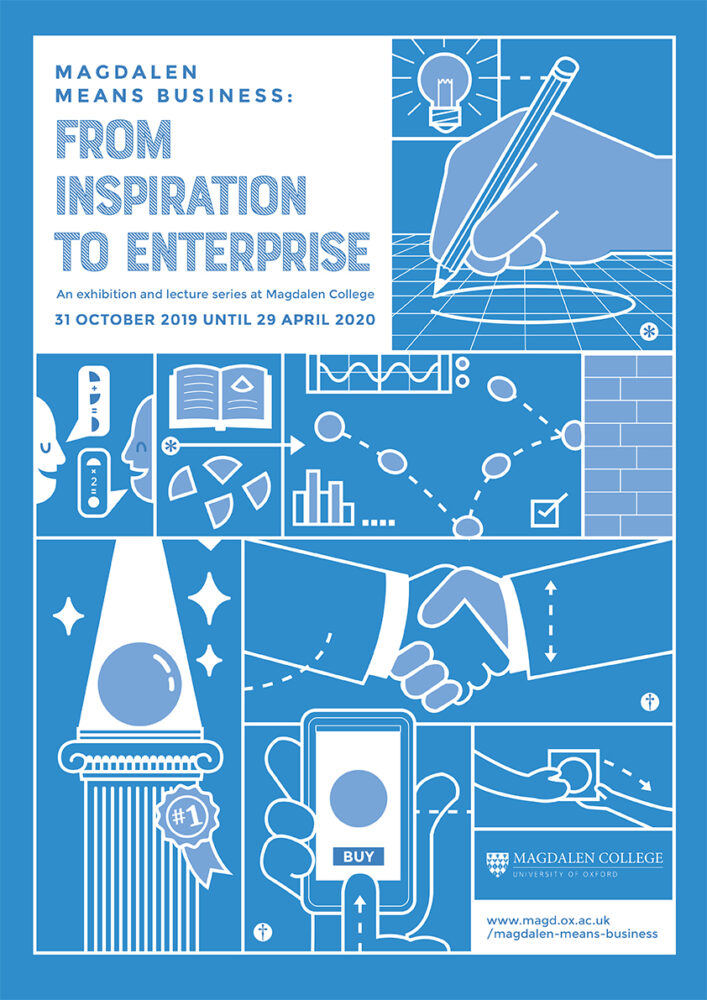 A particular highlight of Magdalen Means Business is without doubt the series of events it inspired.

This speaker series traverses a variety of fields, sectors and industries, always ultimately asking, what is the connection between enterprise and collegiate culture?

These events are open to the public. We welcome our fellows, students and alumni, members of the University, companies in The Oxford Science Park, and spin outs and enterprises from across Oxfordshire. Questions and conversations continue over drinks in the wine receptions. We try to foster encounters which inspire collaboration and new initiatives.

We have been delighted to learn of the initial exchanges and collaborations catalysed by these events. If you met someone at one of these events with whom you have since collaborated, do please share your story by writing to magdalenmeansbusiness@magd.ox.ac.uk. We would love to hear it.

This series began in 2019, turned online in May 2020, and continues to showcase the range of enterprise and innovation within the Magdalen community and the potential and positive impact of these initiatives on the wider world.

We will update this site as new events take place, so make sure you come back often!

The series began wonderfully with Professor Constantin Coussios speaking on the academic spinouts which he has helmed with a particular emphasis on OrganOx and the OrganOx metra –a novel normothermic device which has been developed for liver preservation and repair prior to transplantation and which has the potential to significantly reduce the current wastage of organs and save many lives in the process. Professor Coussios spoke about the value of multi-disciplinary academic community at Magdalen when it comes to developing effective and innovative academic spinouts. He then took a rapt audience through every aspect of the innovation journey from technical to regulatory to commercial, including building and testing the product, building the team and the mechanics of raising funding from investors and gaining regulatory approval for this ground-breaking device.

The Path To QOMPLX: The Search For Ground Truth In Risk Management (21st November 2019 – Oxford Centre for Islamic Studies)

Dr James Semple interviewed Magdalen alumnus, Dr Jason Crabtree about his experience of moving from postgraduate research at Oxford to developing a high-growth technology company which uses AI to address the difficult challenges in responding to some of the most complex risks faced by societies in the twenty-first century. This highly relevant interview addressed issues such as how the latest innovations in AI help governments and private companies lay plans which take into account complex risks, such as risk of floods, cyber-attacks, terrorism and political violence. Jason also spoke about the process of shifting from postgraduate research to military service to founding a company, recruiting an exceptional team and generating significant software revenue.

This lively and stimulating panel event looked at the different aspects of entrepreneurship at Oxford and what both the University and the wider Oxford ecosystem offers to entrepreneurs in Oxford. Along with the audience, the panel considered everything from student incubators to social enterprise as well as the current environment and appetite for entrepreneurship in Oxford. The event also explored what the future might hold for entrepreneurship in Oxford in terms of attitudes, challenges, opportunities and support. The Panel was chaired by Leah Thompson, the lead for Enterprising Oxford at the University of Oxford and the panellists included two current Magdalen students Bethany Plant, co-founder of SafeBangle and Gemma Timmons, co-founder of student incubator OX1. The panel also included Dr. Phil Clare, Deputy Director, Research Services (Knowledge Exchange and Engagement) at the University; Emma Palmer Foster, Strategic Communications Consultant at the Oxford Science Park; and R.A.Williams, a Magdalen alumnus who is both a founder and coach to founders and entrepreneurs.

“Let me tell you about the challenge that humanity faces,” declared Professor Liam Dolan, as he launched into explaining an existential threat to agriculture – the extensive invasion of our arable landscape by weeds. Weeds have exploded since 1997 due to our use of far too much of a tiny chemical diversity to control weeds, the same problem we face in medicine in trying to control the outbreak of antibiotic resistance. Liam has spent his research career in blue skies research, trying to understand the rooting systems that were vital for plants’ colonisation of the land 500 million years ago, when most life was under water, and then one plant sprang out of the water and colonised a continental surface. These enquiries led to studies of the genetic code at issue in that singular event. But, as Head of Department, Liam invited people from industry to come and talk about the most important problems in agriculture, and how the Department could help. A retired head of a company told him the biggest problem is weed infestation, and what’s more, it is a $30 billion USD market. These insights prompted Liam to found his company, MoA, meaning Mode of Action. He spoke of the value of the advice he received from a host of people in the broader Magdalen and Oxford community: “There’s this expertise around here which meant that I don’t think I could have done this anywhere else, but I was able to do it here.” He then walked us through the innovation process of setting up the company, building the team and raising investment and shared insights into what is involved in applying the “genetic tricks” he had developed in fundamental research into plants to the development of the next generation of herbicides.

The inaugural Magdalen Means Business live webinar was appropriately on the topic of entrepreneurship during COVID-19 and beyond. Magdalen alumni speakers, Stephen Newton and R. A. Williams, applied their experience as founders as well as coaches and consultants to a discussion of how COVID-19 would affect founders in areas such as fundraising and skills. The webinar raised and addressed issues such as what entrepreneurs could learn from COVID-19, how best to manage relationships with key stakeholders and investors, and how founders can build vital qualities such as resilience and resourcefulness through and beyond COVID-19.

Innovating in A Crisis: Developing a Ventilator For Covid-19 (25th June 2020 – Live Webinar)

Another highly topical webinar saw Magdalen DPhil candidates Rob Staruch and Tom Kirk speak about the process of inventing and developing a ventilator in response to COVID-19. In response to questions from Professor Robin Cleveland and the audience, both speakers presented an extraordinary journey of rapid and robust innovation in the face of the COVID-19 crisis. Rob Staruch and Tom Kirk took the audience compellingly from the device’s conception in mid-March 2020 through building and testing amidst a host of challenges from remote teams to severe worldwide supply chain disruption as well as the process of working with the UK government and regulators to meet an ongoing crisis. The webinar format allowed Tom Kirk to speak from the University Engineering labs in which the ventilator was developed and audience members were treated to an honest, fascinating, and highly engaging opportunity to explore the process which brought this pioneering and life-saving device from idea to fully functioning product in a matter of weeks. In November 2020 the Institute of Engineering & Technology awarded OxVent the 2020 Global Impact: Small Idea Big Impact award.